‘Every year, the toys were brought down from the attic and placed under the tree hung with angels and lights and smelling of the pine woods. Every evening the toys performed, and every day the tree shed more needles on the floor until Christmas was gone. Then the tree was thrown out and the toys were packed off to the attic where they lay jumbled in a box together…..through the long days and nights they listened to the rain on the roof and the wind in the trees, but the sound of the clock striking midnight never reached them; they never had permission to speak at all, and they lay in silence until another year passed and they stood once more beneath the tree………’

And there starts one of the great stories of the 20th century, by one of its great storytellers.

And you know, sure as eggs is eggs (because you understand how stories work) that something is going to change. And you also know that for all of the lights of the tree and the warm of christmas fires that there’s a darkness out there somewhere, and that nothing will be simple. Hoban does that. He does it with ‘The Marzipan Pig’, which is one of the oddest stories (ostensibly) for children I know. It begins, ‘there was nothing to be done for the Marzipan Pig. He fell behind the sofa and that was that’…..three pages into the tale he is eaten by a mouse, which, in turn is eaten by an owl who falls in love with a parking meter. It’s near impossible to second-guess what’s going on, and yet it’s never silly or arbitrary. I love Russell Hoban, not least for his unwavering acknowledgement of a Darwinian universe that’s red in tooth and claw, and his equally unwavering belief, in these two stories, and in the wonderful ‘Riddley Walker, of the resilience of the human spirit and the power of love and faith and idealism. I also love the fact that when I met him at a Children’s Literature conference in Exeter in the 70’s, we shared a breakfast table. He ate All Bran. At the same time, he handrolled cigarettes. Old Holborn is almost identical to All Bran, at least when they accidentally mix. He would get animated about the teachers on his workshop who wanted breaks…for chrissakes…breaks….they come here to write….it’s hard work, writing…breaks!….and he scattered more strands of Old Holborn about the table. It was a great start to anyone’s day.

The Mouse and his Child are wind-up clockwork toys, broken by a cat, thrown in the bin, mended -sort of – by a tramp, and set down on the highway to seek whatever befalls them – which comes in the shape of Manny Rat – and recruited into a hapless band of wind-up bank-robbers. I’ll tell you no more, other than that, along the way, the Child determines on an unwavering quest for self-winding status and for a family, and that Manny Rat becomes his nemesis. They pass through wildernesses; they endure. 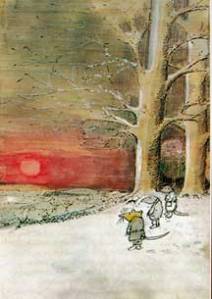 It’s like the journey of a Scott, or a Shackleton. There are episodes I was reminded of when I read Joe Simpson’s epic ‘Touching the void’. Maybe I’ll say too that in the summer when my dad died, we took my mother away for a holiday. I was reading ‘The Mouse and his Child’ on the beach on the Isle of Wight. When I came back from a swim, my mum was reading it. She would not hand it back till the next day when she’d finished it. All she said was: that made me happy.

I have to say I’m a total sucker for soft toys and dolls. Especially dolls like the one my daughter Julie had as a child, the one she gave me, the one who always looks so wistful that I provide her with the company of a dapper fox and and a perky decorator. She remains wistful, does that doll. And, also, since 1987 me and my partner Flo have bought each other wind-up toys at Christmas. They now fill two boxes. None have become self-winding, and I have never heard any of them speak. The Mouse and his Child, of course, can speak, and indeed are not bound by the rules of clockwork and the strokes of midnight. I wasn’t really aware, though, how much of the language of the book had seeped into mine until, inevitably there was a writing task at the Poetry Business, and out of ‘nowhere’ came this poem.

on the stroke of midnight

on some special Eve,

Then, it’s said that stones, or wolves

or trees, or owls can speak.

Or toys piled pell-mell in boxes

kept in lofts, in attic cupboards;

What is it, do you think, they say

just once a year, just for one day,

or week. This is the truth of it.

The dark that lasts all year,

the silent dust that settles

It clogs their tongues.

Listen. They’re as mad as stones

and deaf as owls. They’re let to speak;

have forgotten how, and what, to say.

Stay silent till the twelfth night.

And then they’re put away.

To be honest, ours have their own very jolly boxes, which never go into the dark. And if ‘The Mouse and his Child’ had been as dark as my poem, then my Mum wouldn’t have been happy. Have your own Happy Christmas, and light a candle for clockwork wind-ups wherever they may be.

9 thoughts on “a christmas story revisited”