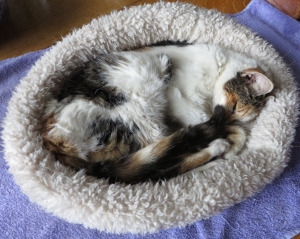 Our twenty three year old Scully’s final sleep. Looks like all the other she’s had. They don’t know how to look anything else but comfortable with their own bodies, cats. For several years she shared the house with two other cats, but saw them out with apparent equanimity.

All her life she shared the garden with the many birds that come to it; ate a good number of them, too. We were cross when it was a robin or a wren or a greenfinch or a great tit. Once we thought she’d caught a woodpecker, but it turned out it had immolated itself by flying into the bedroom window, and thus she was forgiven, though I never forgave her for the time she idly plucked a wren out of the air on its way to feed its fledglings, and we lost a generation of wrens. They’re nesting again, and now will be undisturbed.

She had a symbiotic relationship with the numerous pigeons and collared doves that nest in the holly. The pigeons have been promiscuous and profligate over the years, often apparently too fat and aldermanic to take off after landing, and meeting their quietus in an exlosion of feathers, but the rest just carrying on breeding more generations for her to snack on. I fear that next year they’ll mass umolested on the lawn, and the holly will collapse under their weight.

Scully, for all your increasingly taxing dietary demands over the years, for all your insistence on us waking early and inappropriately, for all the accidents that left marks on our posh landing carpet, we’ll miss you rotten. Here’s a poem for you. I imagine you looking quizzical and condescending and puzzled all at once. Like that cat in the Eddie Izzard sketch, regarding the change of cat food. ‘And this is? New and improved? Is it really. Is it really. Anyway. I’m going out.’

Everyone writes at least one poem about cats
Cats don’t care one way or the other.
You cannot teach cats tricks;
what cannot be taught
cannot be put to work.
They teach us to open doors,
and tins, the importance of fire,
and where to sit.
Cats are elastic, stretch for ever,
curl into a perfect ball,
smile like dolphins in their sleep.
Cats spend their first weeks
in a manic blur, do everything
but fly. Then learn to do not much.
They can sleep eighteen hours in a day.
And do. Never seem lazy
or inelegant, though they will play
with food. If it’s still alive.
Cats spend half an hour a day
in eating, five minutes at a time.
Hours getting comfortable,
more time simply wandering about,
sussing things, beating the bounds.
Some time being private
covering their tracks, and stuff.
A very short time killing food –
– pigeons, blackbirds, rabbits, rats –
and longer crouching by it,
growling. Their wide yawn
is the red dream that shivers
all quick small things.

7 thoughts on “In praise of cats”