Batley Cemetery. Archetypal northern cemetery; it might have been the model for the scenes of courtship and cack-handed attempts at seduction in ‘Billy Liar’ where Tom Courtenay tries to distract Barbara from her orange segments. I’ve not been since I was a teenager, when it was already looking neglected and overgrown, and the twin chapels had been shut up and declared unsafe. I was back there yesterday thanks to the  work of a team of volunteers who’ve restored the West Chapel and made it beautiful, and to the volunteers who have tended and restored the graves of men who died in World War One, and who mark the 100th anniversary of the death of each one. Yesterday was the 100th anniversary of the death of my grandfather, Alfred Terry, and yesterday, thanks to these remarkable people I laid a poppy wreath on the grave that he shares with my grandma, Ethel. The sky was astonishingly blue, and there was an honour guard of a single soldier in full pack and WW1 uniform with sergeant’s stripes; it was moving and lovely.

But here’s where it gets conflicted and complicated. Families tell themselves stories that grow ‘true’ through familiarity and retellings, and grow embellishments, like chinese whispers. We are sure we know the truth as we are told it, and as we pass it on to our children and their children, and so on. I thought I knew my granddad -or at least about him – even though he died 28 years before I was born, even though my mum hardly remembered him herself. She was four when he died. I knew he’d been a soldier, and simply assumed he’d been killed in action. And then, years on, I was rooting through an old attache case of my mum’s, full of small deckle-edged photos, and newspaper cuttings, and random documents like birth and marriage certificates.  I’m convinced that I remember finding a War Ministry telegram regretting to inform my Grandmother, and all of us, that her husband had died in an Army hospital in Aldershot. But I couldn’t have done. Because he didn’t. I knew he’d been a time-served painter and decorator, and I can prove this, but anything else was stories, and only my mum’s stories, because her sisters never mentioned him to me. Two of them never talked about their mother. But I did have his picture 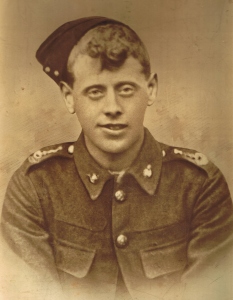 They always told me I took after my Dad. But I look at pictures of 30 year-old me, and it’s Alfred I see looking back. He’s ridiculously young looking. And on the basis of this flimsiest of evidence I wrote poems about him.

In one called ‘Heirlooms’  he’s

and flirter’s eyes. He died drowning, not
at Passchendale, or Ypres, in mud, or snagging wire,
But on an army bed in Aldershot.
Still, in my photograph he’s debonair,

I think that’s fair enough. I think it’s true to what I can see of him and to what I think I feel for him. And then in a later poem I obviously felt a need to take the story a bit further

There he is. Grinning and unsoldierly,
the despair of the RSM. The joker in the trench.
Except, I’ve no way of knowing if he ever was.

But all the same, a bit of a lad. No more than a lad,
father of four, and husband of (I think)
a small girl, left all alone to scrat and fend.

My grandma, Ethel, who went deaf, who sat
with her head in the swelling horn
of the wind-up gramophone.

Listened to the scratchy tinnitus
of brittle shellac records until
they hissed like the sea on a shingly shore.

Who drowned herself, a poor Ophelia,
in the beck that ran hot from dyehouses,
that ran blue and plum and crimson red.

Who died (I think) wreathed in bindweed,
those wide white silky flowers,
and the pink of balsam, sour as a sink.

I notice I was just a bit circumspect with the story.  ‘I think’…I’ve left myself a get-out of sorts.  I’m confident about that ‘unsoldierly’, though,  because I’ve got him pegged as a reluctant volunteer. But this is what a volunteer researcher tells me about my granddad.

Alfred Terry was born in 1882 in Batley to Samuel Terry and Hannah Wood.
He married Ethel Dransfield on the 10th June, 1905
The 1911 Census shows Alfred and Ethel, together with their five year old daughter, Nellie, living in 3 rooms at 60 Bradford Road West, Carlinghow, Batley. Alfred’s occupation is given as a House Painter. Three more children were born to the family, Marjorie (my mum) (1911), Norman (1913) and Hilda (1915).

Before the war Alfred had served his painting and decorating apprenticeship with John Tomlinson of Upper Commercial Street, Batley. He had joined the Batley Volunteers and Territorials in 1901 and had been promoted to Sergeant before WW1 broke out. He was entitled to a long service medal by 1914 but the war had interfered with the receipt of the medal.

When his camp at Whitby was broken up Alfred accompanied the Territorials to Doncaster, Gainsborough and York. His comrades went to the Front without him and he returned home to Batley. After a short stay at home he was sent to Beckett’s Park Hospital, Leeds as he was suffering from Bright’s Disease (a chronic inflammation of the blood vessels in the kidneys) resulting in protein in the urine. He was never to return home and died in hospital on Sunday the 8th of August 1915.

On the day of his funeral a short service was held at his home. His coffin of polished oak (provided by Messrs. Will Akeroyd and Sons, Ward’s Hill, Batley) was draped with the Union Jack and his cap and belt were placed upon it. Afterwards, family and friends together with military personnel attended his funeral at Batley Cemetery. Edith was surrounded by many family members including her two little girls, Nellie and Marjorie. Alfred was held in high regard by many and there were numerous floral tributes. Six sergeants of the 2nd/4th K.O.Y.L.I. acted as Bearers.

The service was conducted in the cemetery chapel and the choir sang “Jesu, Lover of my Soul” and “Lead, Kindly Light”. Colonel Hind had given permission for a firing party of the 3rd/4th K.O.Y.L.I. under the command of Sergeant Ainsworth. They fired three volleys over the grave and two buglers from the 3rd/4th K.O.Y.L.I. sounded The Last Post.

Alfred’s widow Ethel continued to live in the Carlinghow area and bring up her children. She never re-married and died in 1937 aged 55 years. Alfred’s name appears on St John’s Church, Carlinghow, War Memorial.

(My thanks to researcher Susan White, Batley History Group, April 2015)

What can I say now about that    ‘grinning and unsoldierly / the despair of the RSM’?.  This is Sergeant Alfred Terry, who’s entitled to a long-service medal. Who died of Bright’s disease, in Leeds, and not pneumonia in Aldershot. That’s not all. I relied on my mother for stories of her family and her growing up…and indeed, of my Dad’s family, because he never told any.

For years and years I believed that my grandma Ethel drowned herself, and that my mother was a teenager when she was left homeless. What’s more, my daughter Julie tells me that that’s the story she believes, and she believes her gran told her so. But I stood by a grave yesterday that said quite unequivocally that Ethel died in 1937. My Mum was 26 then; hardly a teenager. It’s carved on the headstone. And nowhere anywhere can I find a death certificate; I’m not sure I want to. But what do I do about these poems that I wrote because I believed them to be true? Before I published my pamphlet Backtracks last year I’d had the information from the Batley History group, and I just had time to change the poem ‘Thole’, and omit the line about my mum’s being orphaned young. But not the ones about Alfred.

It’s a curious business, this relationship between poetic and personal/documentary/historic truth. In fact, I think it’s a perilous business. But it’s the only one that matters. I’ve been brought up short by ‘history’ finding me out. I’ve been writing poems about people who are long dead, and can’t argue. I feel morally conflicted about them. But what about the living, and writing poems about them? What then?

I’m going to have a think about that, and in a month or so, if I have the glimmerings of an answer, I’ll let you know. In the meantime, my thanks to the poets who gave me the courage to write about the living and the dead instead of describing mountains: Kim Moore, Gordon Hodgeon, Norman MacCaig, and, lately, Fiona Benson and Pascal Petit. Those five especially.

And  thanks and ever thanks to Kevin Morley, who played the part of the honour guard sergeant with such conviction, to Tony Dunlop, Kevin McQuinn. Thanks to Rev. Deborah Wainwright of Central Methodist Church for her quiet words at the graveside, and to all the volunteers of Project Bugle who arranged yesterday’s ceremony, and who continue to clean the graves and commemorate the deaths of men who died 100 years ago.

4 thoughts on “Putting the record straight”