Apology first. Last week, I promised you we’d be having a guest, and not just any guest, but one who’s celebrating the launch of his second collection. One way or another, circumstances have conspired to leave me a bit addle-brained. I was planning to be up on Skye next Sunday, away from wifi, and recharging my batteries, wandering about the landscapes that have decorated my Facebook pages on and off throughout the year. Like this. 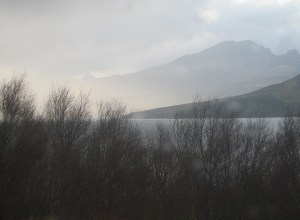 I was planning to invite Effie Macpherson round for tea and Dundee cake, and to thank her for not minding my putting her in poems. I’ve had to cancel that trip. On the plus side, I’ll rebook it for March, when the days are longer, and the trees are bare, and there’s still snow up on the tops. Silver linings, wherever we look.

In the meantime, I thought I’d take the chance to share a couple of poems, and some of their context. As I get more depressed and angry about the current government with its slim majority, cutting a swathe through everything that has made my life worthwhile for 70+ years – essentially the democratic social concensus laid down by the Attlee government of 1945 – I think of all the people I knew who made that possible. Essentially the working men and women, and the returning troops of the British Army, who were determined that there was no way there would be a return to the pre-war world of social inequality. My father-in-law, Stan, told me how, after fighting in the Far East, he and his comrades got the news that Churchill had said they could stay there as long as he thought it necessary. Who were they to be asking to come home? And I guess no one really remembers Churchill’s pitch about how we could all happily return to the pre-war status quo. I also wonder about how significant it is that so many of the politicians familiar to me in the 50’s had been serving soldiers.Men like Dennis Healey. Aristocrats with a Disraelian sense of social obligation, like Macmillan. We thought him a figure of fun in the 1960’s. Look who we have now.

Here’s the PM, larging it in a Defence debate about Syria. Tony Blair was another who could get all Henry the Fifth when it came to sending other people’s sons to war. They have a lot in common, these two. Not least, that they have never been in uniform, have never known privations of any description, and have never faced anyone trying to kill them. I have a strong belief that if they had, they would talk a different talk. They have never known how loyalty to your friends and comrades is essential to your, and their, survival.

Last week, Facebook poets were all in a flap because Roger McGough is supposed to have complained about the absence of rhyme and anger in the poems he was judging for The Bridport. I can’t get angry or worked up about that. If you’re going to be angry, then make sure you don’t waste it getting red and indignant. Like the PM, for example. And I am angry. A lot of us are. So, in this half term cobweb strand, I’ll take a deep breath, and remind myself why 1945 is so important, and say thank you to the generation that made it possible, and to wonder how they feel, watching their achievements trashed and belittled by ideologues just as mad as the fanatics who destroyed the Bhuddas of Bamiyan, and lay waste to treasures that have stood for two millenia.

This first poem, for Stan, came about because, as he passed 80, he developed Parkison’s Disease, and needed all the support and care of the NHS. And he got it, in spades. He knew what life had been before it; he knew what hard times were like, growing up in Liverpool after WW1. He was a lovely man, and one who served in the Far East, on reconaissance in the jungle.

He knew how it was stumble on mutilated corpses, how it was to do a forced march in tropical heat and humidity, and what it was to infiltrate enemy front lines. Like so many of his generation, he didn’t talk about it much. He wanted just get on with his life, his work as a butcher, to give his children a good life. He used to tell me stories, every now and then when I went up to cut his hair. Here he is.

Short back and sides

It’s fine, Stan’s hair. His wife, Vera, says:
“He gets it from his mother.
They were all fine haired, her side.”

He’s soft-skinned, too. Big hands
with liver spots. They tremble, agitate
an invisible test tube, like a chemist.

Big ears, lobes like small ox-tongues.
He likes his hair cut short.
Curious to be holding his head still,

gentling the clippers in the back of his neck,
hearing the buzz, feeling light hairs fall.
I’ve eaten snake, he says. A python.

He could butcher anything the lads brought in.
He’ll not eat curry. When you smell that
you know you’re closing on a village.

On Recon. they’d take the headman’s son.
Shackle him on the bonnet of the Jeep.
See, if no one made a fuss we’d know

no Japs was up the trail. Drive him for a bit
then let him off. The skin of his scalp is fragile,
scissors cold on the pink of the skull.

His goalkeeper’s hands beat a soft
tattoo against his knee, When he remembers
he clasps them like a handshake, or a prayer.

In jungle once, he came upon a pal
pinioned to a tree, opened up from throat to groin,
his piled entrails at his feet, a black buzz of flies.

I’ve never told our Vera that. I tidy round his neck.
I’ll shake the teatowel outside on the step,
watch the hair blow, like dandelion clocks.

His hand have freed themselves.
He has forgotten them.

I’m privileged to have known him, and so many others, like the communist History teacher I worked with, who’d been in the debacle of Arnhem, like my uncle who was at the liberation of Belsen, like another Stan I worked with in a warehouse, who was at Anzio, and so on and on and on. At the same time, I remember men like my Dad who were kept at home in reserved occupations. Pitmen, steelworkers, munitions workers, textile workers. We forget that soldiers need uniforms and that someone has to spin the yarn, and weave the cloth. I suppose, too, that we forget how the textile industry around the Heavy Woollen District was in its heyday making army blanket and uniform cloth for as many armies as would buy them. No matter. These were the working men and women who, without a shred of ideology in their bodies, taught me socialism. So, a poem, of sorts, for them.

According to their cloth

I knew one man made a forced march in a column,
full pack and rifle; heat and scrub, humidity, thick dust;
forty miles in a single day and never knew a battle plan.

One man who fell from a plane
in a night full of parachutes,
the wind white silk ; the dark sound of planes
dwindling up into the night and him falling into fiasco;
who taught history, who clung to Communism
like a Tudor martyr to a relic.

Another who drove his jeep into something
that a man might make, experimenting
in a slovenly way with making up an idea of hell;
into a camp made out of rust and rot,
of wire and sweet black smoke and rags and sweat;
No one came to liberate him;
no one to take his eyes from the dark,
no-one to bring him back from the dead.

The one I loved most spun yarn
for uniforms and army blankets.
Reserved occupation. Conchie.
All the same to him. Nobody tried to kill me.
He cut his coat according to his cloth.
Took his suit lengths into Leeds,
to Jewish tailors, emigrés
in small dark shops in narrow streets.

You don’t choose where you are in history.
You cut your coat
and wear it.

So, there you are. Possibly not what you expected on a soft and golden Autumn day. But sometimes, you just have to deal with your anger. Back to normal next week, with a proper poet. I’m fairly sure he gives not a fig for formality (other than the formalities of poetic form) but come smartly dressed anyway. Tuck your shirts in. No inappropriate shoes or hairdos.

Short back and sides was First Prize winner in the Ilkley Lit. Fest Poetry Competition, judged by Blake Morrison

According to their cloth is part of a 4 poem sequence in the Leads to Leeds project which is curated by the estimable Helen Mort. There are some absolutely cracking poems on the site. Here’s the link:        http://leadstoleeds.com/