….here being the watershed above Loch Dughail, and the first magic view of the Cuillin before you drive down a steep winding road to Achnacloich. Norman Macpherson, the crofter and shepherd who rented us his holiday bungalow for years, told us how he saw a White-tailed Eagle fly slowly above Loch Dughail, and how it was perfectly reflected in the cold still water. There’s steel barriers now,  to stop you coming off the road for the first quarter of a mile. Didn’t use to be; it was a bit unnerving in fog. Even more so if was snowing. One night a few years ago, a couple of lads missed the corner at the bottom and drove their truck into the loch by the outfall. It was said drink might have been involved. The lads legged it. Diesel got into the loch, and that put paid to the drinking water supply for a bit.  One of those stories we used to look forward to when we arrived each year. Who’s building a house; who thought it was a cracking idea to build miles of deer fence; isn’t the new road nice, but don’t you miss the windy bit by the Black Lochs? I need no photographs of Achnacloich any more. I carry it in my mind, everywhere.

In the short grass, a flirt of dunnock
that sets the sheep trotting

Rain dragging its skirts
across the skerries in the ebb

Right on the rim of the moor
three hinds , watching

A curl of bluegrey turf smoke
from the red-roofed croft

The heron just crumpling
into the alders,
like a broken kite
the deer watching
between the moor and the sky
small birds lifting from the field
like the hem of a skirt in a breeze
the lamentations of sheep
the bright red tin roof of a crofter’s house

I love the Isle of Skye. I always have, but I never quite understood why until I went to a Greek island …Alonissos, (though it could have been one of hundreds). I realised it was the way mountains rise straight out of the sea, and that gives them a scale that much bigger mountains don’t have. The Cairngorm or the Nevis range are much bigger and more massive, but they don’t have the same drama of scale and light. And I like the weather. I like rain that you can see coming for half an hour before it arrives. Should have been there last week, but for various reasons had to cancel. I shall miss charging my batteries. I wrote last week that I planned a bit of self-indulgence. This will be it. The last couple of years, while Norman’s bungalow’s been unavailable, we’ve stayed a few miles along the road at Ord. Between Tarskavaig and Tokavaig, there’s probably the best view of the whole Cuillin range.This is a just a bit of it. Tokavaig. It comes with a poem. (Told you it was a self-indulgent week).

sea thrift ruffling,
turf rooted lush in the quartz,
black wet skerries
beyond low cliffs;
stand in the wind
to watch weathers coming
bundled up like refugees,
trailing and shedding
odds and ends of stuff
packed hurriedly
or grown burdensome
or too awkward
to bear.

Drive a few more miles of steeply twisty road, and here you are, in Ord. You can see as far the Red Cuillin peaks, Sgurr na Stri, Bla Bheinn with snow on the top, and, just across the loch, the headland of Suishnish where there are eagles. It looks placid enough, but you could be in a squall in half an hour’s time.

When I first came here, about 30 years ago, I read in a guide book that this part of the island, the Sleat Peninsula ‘holds little to interest the serious walker’. As someone who repeatedly gets sort-of-lost within a mile of this cottage, I’d disagree. But I’m not a serious walker, I suppose, even if I aspired that way. I just like wandering about on the hills, sort of lost, but always with a view to give me my bearings. I love the way the land changes perspective with every 50 or 100 feet you climb. I don’t know what it’s like in summer. We go in late October or the end of March. It’s not green. It’s like this.

There are few paths as such; you follow deer and sheep tracks and rely on them to keep you away from the awkwardly steep and overly wet bits, through draggy bracken and whin, and tussocky bog. And so you keep moving up, and every time you look back (say, from where the last picture was taken) there’s treasure. 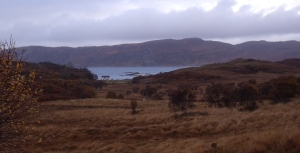 There’s the Clearance crofting village of Boreraig on the other side of the loch, the gleam of while coraline sand where seals lie at low tide, the white house where no one is ever in. I can take it with me, anywhere. I take it to the gym (when I go)…I can go for walks in this landscape. Start the treadmill and go.

Bracken flat from the wind
and snow come from the west;
that boat bucking the wide loch’s swell and chop.

Glints of outcrop quartz,
stumps in an old jaw tired of chewing
the cud of weather and time; tired of wind.

The hum of the strung fence;
the soft wet glottals of snowmelt becks
in a clutter of tumbled gullies.

The nameless plants of sour land,
all ruby, emerald and rust,
that nothing can live on but spiders.

A soft gleam of coral sand
where seals used to lie,
and the tide coming in.

I’ve learned to walk without preconceptions. I used to try to make the place fit the ideas I’d half-assimilated from John Prebble, and all the other writers about the Highland Clearances, about the military road builders, about Culloden. It took a walk to Suisnish, and a walk to Boreraig, to put that to rights. They’re both of them antidotes to lyricism. That’s where we’ll finish.

land shifts, won’t be fixed;
mapped tracks to Suishnish come and go;
a new fingerpost at the road edge
points to only slough and moss
where one day there’ll be stands
of rowan, holly, aspen, oak,
birch and willow, alder, ash;
they’ll turn the clock back to an age
before the blackfaced sheep.

Metalled roads will crumble
while sheep potter and nibble
between polished stones
on the shore at Camas Malag;
maps will need redrawing,
and histories rewritten,
here at Suishnish,
where the track runs out
by one grim croft, sinking
in a moat of hoof-pocked mud,
set about with desperate trees
brittle and grey as bones.

Its floor’s a trodden slurry;
the chimney lintels tumbled,
spilling rubble in cold hearths;
doors hang drunken, hinges broken.
Someone once had thought to make a go of it;
put on a bright tin roof, hung doors,
glazed window spaces; fixed boards and cupboards,
lit fires; brought in a stove, a table, chairs, a bed.
Then, one day, just upped sticks,
cleared out; fled.

It’s a sad bleak place that croft. But I wouldn’t leave you on a headland where people finally gave up the ghost. It’s cosier in the cottage back at Ord . Wish we were there. 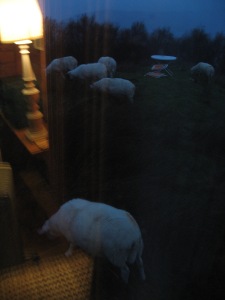 Thanks for your company. Next week we’ll be having a guest. I think that, like half the world, she’s at Aldeburgh right now. All I’ll say is that without her, I wouldn’t be writing, and you wouldn’t be reading this cobweb strand. Be early to avoid disappointment. By the way, I just discovered, by accident, while I was proofreading this post, that if you click on the pictures, you can see a full-screen version. You probably knew that. Me? I’m like a kid with a new box of Lego.

4 thoughts on “wish we were here”