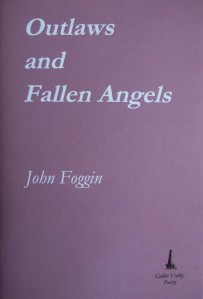 Shameless self-promotion to start 2016. Here’s a series of poems that buck the trend of the previous three pamphlets. All the poems in those, bar one or two, had been written between 2012 and 2014. Nearly all of them started life in writers’ workshops. ‘Outlaws and fallen angels’ is different because it took a very long time to come together, and because it took a lot of rewritings. Whether this is a good thing or not I couldn’t possibly say.

It sprung from a compulsion to find different voices, to get out of my default voice, and to explore different ways of thinking. It’s what playwrights do for a living. Amazingly they can inhabit a whole roomful of personas; they seem to know how their inventions and creations think and feel. I have no idea how they actually invent characters. It’s beyond me. But I had the idea that I might actually borrow characters. I didn’t think that up on my own. I borrowed it from Carol Ann Duffy’s wonderful The world’s wife. I borrowed from U.A.Fanthorpe’s George and the Dragon. I borrowed from With a poets eye: a Tate Gallery Anthology.

I started with one of my favourite painters..J.W.Waterhouse. His staple was adaptations of myth and legend, frequently via Tennyson and Keats. I am very fond of his Lady of Shalott (mind you, so were most of the Pre-Raphaelite Brotherhood) and even more so of his La belle dame sans merci. If you look at enough Waterhouse paintings, and there are lots and lots of them, you realise that the same face appears again and again. This one.

Four poems in the pamphlet try to tell the story of the artist, the model, and the artist’s wife. It took me nearly two years to write them. Maybe I should have written a novel about them. I wish Jill Dawson would.

The rest of the collection is about the sculptures that most engage me. I believe each of them imprisons a soul. I wondered what they would say if I listened hard enough. They took me by surprise; I had no idea they were who they said they were…especially Anthony Gormley’s.

Anyway, they’re out there, now, and I couldn’t be more happy for them.

I couldn’t be happier, too, with endorsements from two of my favourite poets: Kim Moore and Steve Ely. You can get the details of their collections on last Friday’s post. If you don’t own them yet, then you should put that right forthwith.

I’m relishing typing the next bit. I’ve never been able to quote what someone has written about my poems, and Ive no intention of resisting the opportunity. It’s just too much fun.

Kim says ‘This is poetry written with a keen and unflinching eye, that takes us on a whistle-stop tour of history and mythology via explorations of the lives and loves of artists and their work’.

How good is that!

Anyway. Thank you for bearing with me. If you want to buy Outlaws and fallen angels you can follow the link from the My books page. Me and my publisher, Bob Horne, have agreed that he’ll handle all the sales. So huge thanks to Bob. And thanks to all my readers who’ve followed the great fogginzo’s cobweb and made it worth the writing every week.

Next week we’ll be back to normal with a proper post and a proper guest poet. I’m already looking forward to it. Once I come back down to earth. Have a splendid 2016 xxxx