I suspect that when people think (or, in my case, dream) of Scottish islands they have in mind extravagantly sheer cliffs, loud with gannets and fulmars, out in the wild Atlantic. Or the Gothic fretted ridge of the Cuillin. A dusting of snow on Jura. I know less than nothing about the islands of the North East, and of Orkney, unless its an image of the angular stones of Callanish. I just know they’re not my place, without mountains, low-lying. There’d be no place to hide from the weather, from the implacable winds, from yourself, or your neighbours. Places like Shapinsay.

Shapinsay is where Gaia Holmes has been travelling to in the last year or so. You can probably get to Australia more quickly than you can get to Shapinsay from Halifax.She wrote this about it. It needs no commentary from me.

are thick and heavy.

They leave their indentations

on our thinning days.

to chaperone the darkness

they are wild, brutal,

They bruise the windows

of our winter fires.

Gaia’s dad died recently. Gaia, her mother, her brothers, would travel there to care for him in his last months. Her dad was a potter, a man who worked with fire and clay and glazes to create magic raku pieces. A man who lived in a great barn of a place.

Impossible to warm I should have thought, no matter how often he fired a kiln. When Gaia was our guest on the cobweb last year she was dealing with the business of cold, of distance and the absolutes of dying. At the time, I wrote this about her :

“Whenever I read Gaia Holmes’ poems, or hear her read, I’m put in mind of the world and work of Peter Blake. To nail my colours to the mast, his image of Alice is how I’d picture Gaia’s narrative voice. Not quite other-worldly, but knowing things I have no immediate access to, and aware that the world is strange and lovely and that it can make us vulnerable. It’s a voice that makes me think of the doughty, unworldly, resourceful, compassionate clear-eyed heroines of folk tales. The ones who have no expectation of the kindness of  stepmothers and stepfathers and spiteful siblings, who are stoic about their work among the ashes, who undertake unnerving journeys through forests to the hen’s leg houses of cruel aunts, who understand that everything you are given is a gift to be used for the betterment of the world….all that.”

“poems that keep going off in your head…. like those fireworks that explode like a huge dandelion clock, then keep going with crackles and little furnace sparks and bits of windscreen glass and buttons and pins”

I could add: I also like the strange alchemical changes of raku pots, and the way they go on changing, enriching themselves. I know of one raku potter who fires  pieces that he will put in a steep-cut stream bed for a year or more; pieces with metals, glass and resins in the clay. They are made by the magic of water and fire.

Over ten years ago, Gaia wrote this poem for her dad. Only the dedication’s changed. That seems very poignant to me. It’s a strange thing to write that valedictory dedication for one you love. Believe me.

In memory of David Holmes

Curved over the wheel

and grew out of the coil

Bowls went into the kiln

and came out glowing;

he left them crackling

and cooling on the lawn.

they had turned into jewels

against the shaved grass.

He was always pale

and ghosted with clay;

smelling of wood-smoke and porcelain,

in his ginger beard.

whilst he spun and molded;

with the cheese wire

and when I’d finished

he’d shape his hands into a bowl

I’d rinse my fists in them

until the water turned to milk

and dripped through his fingers.

his gifts come to me

packed in gold curls of sawdust;

And as the urban breeze

stalks and rattles my street,

his wheel hums and whirrs

over the roar of Shapinsay winds.

‘Huge beetles’  Think of the irridescence of the carapace of a beetle, those liquid metallic blues and greens. Raku glazes. I love this poem and the love in it. The exact rightness of ‘fudge’…which has weight and the texture and tactility of clay, and a child’s understanding of what she likes. try this poem on the tongue, listen to it and linger on the ‘moment’ when fire’s baptized with brine. It’s a treasure house is this poem. She does that.

(It occurs to me that if this is your visit to the cobweb I would be remiss if I didn’t introduce you. Mea culpa. Have a read of this, and then, if you wish, check out more of Gaia’s work in a post from September 2015:

As well as being a familiar face on the local poetry scene, Gaia Holmes is also known nationally. She has read at literary festivals throughout Britain and beyond. Her poem ‘Claustrophobia’ was highly commended in the ‘best individual poem’ category of the Forward Poetry Prize, 2007 and ‘A homesick truckie In The Algarve’ was the featured poem in Frieda Hughes’ weekly literary column in ‘The Times’ (May 2007). Currently she runs the Halifax-based writing workshop ‘Igniting the spark’ 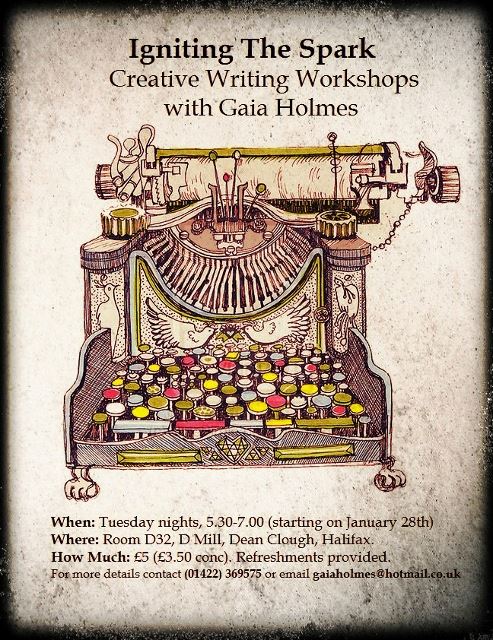 (There are many poets around Calderdale who’ll testify to the richness of these workshops, including my publisher Bob Horne, who’s just produced his own debut pamphlet ‘Knowing my place’, and the hugely talented Natalie Rees among them.) Her  first full length collection, Dr James Graham’s Celestial Bed in 2006. and her second Lifting the piano with one hand in 2013 [both publ. by The Comma Press]. Joan Jobe Smith has called her ‘my favourite contemporary female poet’. She’s not alone in that.

She said in an interview  : I think that when writing Dr James Graham’s Celestial Bed I was less conscious of an audience and destination for the poems. I wrote the poems without thinking about who might read them and where they might end up. They were plump things crammed full of imagery, a bit wild and a bit naughty and they didn’t care………… Sometimes I miss the old-style-Gaia-poems for their excess

But if what she writes at the moment is more pared-down, more Giacommetti than Rubens, it’s no less rich and resonant, and, above all, moving. Poems that speak direct to the heart and the blood. I’ll leave you with these that Gaia’s been generous enough to share. So much is coming from those long journeys to a bleak low place in the eye of the wind. There’s the business of learning the language of this weather that has different meanings from the one you know. And I think these two poems set them side by side and tell each other what they understand. It turns out we don’t even understand the one we thought was familiar

and I sit on my mother’s doorstep,

slip into the scent of rain.

each little stitch in its seams,

a memory of something better,

a thread of time

before this gridlock, this limbo,

Before the sink holes and the gaps

and the words we could not say,

before my cups and my plates

was liquid, but stable

and the world’s bones

were too young for breaking

and no one stubbed their toes

We understand even less the unchanging climate of a hospital. Outside is the uncontained and unimaginable.

You’re not used to this:

warmth on a dial,

by the hum and tick

of the nurses shoes

outside your tepid room.

and I want to bring

I want to let the wind

I want the wild rain

In the interview I mentioned earlier,Gaia said: A friend once said ‘You have to write from the throat of the wolf’. I like that idea but do sometimes worry that, with this heightened awareness of ‘the reader’, I’m playing it too safe and ‘writing from the throat of the Labrador’ . There’s no playing safe in these new poems, I think. Let’s finish with this one, and then be quiet.

hygge (n): A Danish word which, roughly translated, means, the art of building sanctuary and community, of inviting closeness and paying attention to what makes us feel open hearted and alive. To create well-being, connection and warmth. A feeling of belonging to the moment and to each other.

Tonight, with you calm, clean,

smelling of lavender in your new pyjamas

and the fire I’ve been trying to kindle for hours

finally settling itself down to blaze

and crackle and glow,

I light all the candles I can find,

put Tallis on the stereo, sit holding your hand.

Tonight the sea will be too wanton

to carry a ferry.

and in the morning there will be

no fresh bread or milk

on the shelves of the village shop.

Tonight we will keep the cats in.

Tonight, we will be landlocked and cosy

and bolshy wind rocks the caravan.

Tonight I will feel your knots unravelling,

as love and thin motets chase the cold

from the corners of the room,

and I will almost forget

that you are dying.

6 thoughts on “Alchemies and islands. And a gem revisited : Gaia Holmes”