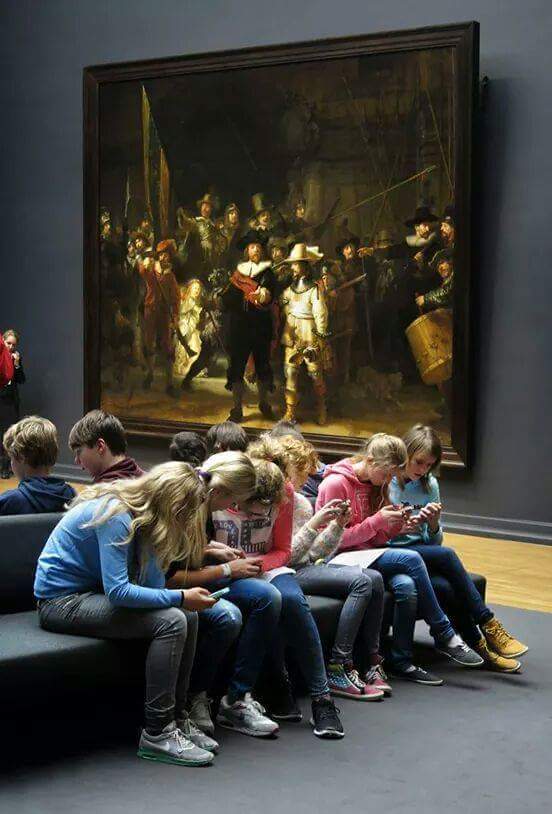 If you’re on Facebook I’m pretty sure you saw this image some time ago. I’m pretty sure it was taken, and shared, to provoke a dog-whistle response from those of us with short memories. And it did. Tutting in various shades of articulate disapproval.

Here’s the thing, predictably enough; in my day, back in the second half of the 1950s, it was television that was turning young people into cretins. Television and rock ‘n roll. Bill Bryson somewhere made the point that exactly the same thing was said about radio before TV arrived. And in an earlier age, about books – novels in particular, which were deplored for softening the brains of their (mainly female?) readership. Raymond Williams wrote a wonderful book : The country and the city. The core thesis is that a study of literature reveals an infinitely regressive sort of nostalgia; every generation deplores the loss of a golden age that’s curiously always about 100 years earlier..or maybe two generations. But you get the point.

I reckon, on the evidence of my own adolescence, that I’d have been one of these kids, developing dexterous thumbs, Twittering my life away, headphones plugged in. No idea what I’d be listening to, being of an age when music seems to have stopped being dangerous and offensive to older people. You see how easy it is..in my day…proper rock n roll….this stuff they call R&B these days…tut, tut, tut. But I’d have devoted most most of my waking hours to being one of the in-crowd.

In my Boys’ Grammar School 5th Form ( trans: Y 11) and Lower 6th Modern (trans. Y 12), being one of the in-crowd involved two key elements. Clothes, hairstyle, music AND avoiding any hint of weakness…usually involving sensitivity, sincerity or deeply held belief. We took a deep interest in the dimensions of trouser bottoms, the question of button-down collars; suede shoes were good, but Chelsea boots were what you wanted; you could be terribly conflicted by a choice of a crewcut or a Tony Curtis. We worked incredibly hard being on the ironic/sarcastic spectrum. The overall outcome was that it became impossible to praise anyone, since this was immediately assumed to be a piss-take. We distrusted just about anything our friends said to us. We worked terribly hard at being terribly unimpressed. Cool, I suppose. The idea of expressing any sincere enjoyment of literature was totally foreign to us. We were very good at writing clever essays about it. The only poetry I actually liked was Metaphysical poetry, because it was clever, witty, sardonic and sexy…all of which I secretly aspired to. The idea of actually writing a poem would never have occurred to us. And if it had, we’d have hurriedly suppressed it, in case anyone found out. And so I think I really do understand, and retrospectively empathise with, these i.phone kids being studiously unimpressed by great art. Plus ca change. That’s what I think.

Which is why I’m so impressed…maybe even awestruck…by these young ones, like Laura Potts [https://johnfogginpoetry.com/2016/11/06/the-young-ones-and-an-undiscovered-gem-laura-potts/ ] and by today’s guest poet, Hannah Hodgson. By their talent, by their commitment to their trade, and I think, by their courage. I’m 50 years older than they are and they put me to shame. There you are…mea culpa. Time for our guest, who Kim Moore has encouraged, mentored and championed, and without whom I would never have come across .

The Chris May Award for Personal Achievement

I really couldn’t resist tracking down this photograph, which will be explained very shortly. Just as I couldn’t resist following her You Tube clips, and her posts. I asked her to write her own introduction:

“I have recently been published in The North magazine, as part of a feature on Dove Cottage Young Poets, a fortnightly writing group that I attend tutored by Kim Moore. I have won several Young Poets Network competitions organised by the Poetry Society.  I was Poet In Residence at the Lakes Alive Festival in 2016 and Young Poet In Residence at the Kendal Poetry Festival in 2016. I am a finalist in The National Memory Day best young writer competition run by Literature Works and the Poetry Archive. (results for this will be announced on May 18th, so fingers crossed)  and winner of  The Chris May Award for Personal Achievement in the North west cultural Education awards  I run a blog (hannahwritesablog.wordpress.com) and a YouTube channel (youtube.com/c/HannahHodgson). I run the poetry club at school, and am a student librarian. ”

Now, if you follow the Youtube link, you find Hannah doing something I could not have dreamed of  all those years ago. Amongst other things, she talks about her love of books, of writing, and her struggles with her illnesses and physical condition; she talks about all of it with candour and a complete lack (apparaently) of selfconsciousness. She really does have things to say. Which is why she writes poetry that stands on its own two feet. Off camera, she’s self-deprecating about her poems. She writes to me:

“I have attached three poems, I hope they are okay. I was wondering if after you have posted about the poems if it would be okay for me to perform one of them on my YouTube channel, then put a link that people can click on to read what you had to say about it? Also, if one day by any chance I ever got a pamphlet or collection or something (bit of a pipe dream at the minute haha), would I need to reference to your blog?”

The answers are:Yes. Please put one or more of them on You Tube. No. When your pamphlets and collections come out I will advertise them and promote them on the cobweb. Promise. Right. Just a little more context before we get to the poems, because I think Hannah’s achievement so far has been hard earned and well deserved. I took this from the Kendal Poetry Festival page: http://www.kendalpoetryfestival.co.uk/708-2/

” One thing that we believe makes our festival unique is the inclusion of young writers throughout the festival.  Members of Dove Cottage Young Poets meet once a fortnight to read and discuss poetry and write their own poetry with Kim Moore, one of the Kendal Poetry Festival Directors.  The group is funded by The Wordsworth Trust and this year they’ve already performed with Ian McMillan at the ‘Picture the Poet’ exhibition.

We believe they will bring a unique energy and enthusiasm to the festival, and at least one Dove Cottage Young Poet will be performing at every Main Reading.  If you’re wondering what young people write about, we can tell you their subjects range far and wide.  They’re writing about sexism and feminism, politics and relationships, family and the impact of the media.

When we were putting together the programme for the festival, we considered giving the Dove Cottage Young Poets a separate event but we decided we wanted them to feel part of the whole festival, and part of the wider writing community in Kendal.

This is one strand of the festival that we’re really looking forward to developing and growing over the next few years (assuming we’re crazy enough to do this all again!)  We asked Dove Cottage Young Poets to send in an application to be our Young Poet-in-Residence this year, and friend of the festival David Tait read through their poems and personal statements, and after much deliberation selected Hannah Hodgson, pictured at the top of this post.

Hannah will perform at the Launch of the Festival, and will also perform alongside Clare Shaw and Hilda Sheehan on Saturday afternoon.  She will also receive mentoring from Clare Shaw as part of her residency.

Hannah Hodgson’s poems here are sparsely furnished, small artefacts with odd yet particular details: alphabet spaghetti, a wish that the brain could talk, words slipping through a back gate, Alzheimer’s and what a ring should and shouldn’t mean. I like that the poems tackle big themes but remain small. Each word is weighted just so.

Which means that you’re now more than ready for the poems. Here we go:

Those three letters tower above me

The teenage me wants to drive

The teenage me wants vodka

The teenage me wants to go backpacking

Teenage me is locked

behind the bars of my chest.

We can only do some of the things

she suggests in her begging letters

I had so many things I wanted to do.

I read these poems in a way I rarely do. I don’t read them aloud because I can’t physically inhabit the voice. I can imagine it well enough. I can’t describe it.

I see straight off what David Tait meant about each word being weighted ‘just so’, about the apparent economy of effort in tackling the ‘big themes’. The teacher in me enjoys the resonance of the of the title and the opening. It’s clever and deft. It sets up that conflicted sense of self and identity. I like the observation of the physical shape of ‘ill’ as a skyline. I’m haunted by the unspecified things that ‘we can only do some of’. The last line is utterly shocking in its plainness, and in the layers of meaning in ‘I wanted’ when I’m expecting ‘I want’.

I see a bruise on his vocal chords

as he delivers a package

“You aren’t going to get better.”

I try to breathe –

but my eyes sting of paper cuts

and my chest heaves silent tears

behind the clasp of my lips.

This second poem nailed my attention in its first line; carrying weight you’re not equipped to carry will hurt and bruise and distort. The sting of paper cuts. Utterly unexpected. And finally, that line break as ‘my chest heaves silent tears / into storage’; ‘heaves’ is used in a way that produces a doubletake. You think it’s intransitive. It turns out you’re wrong. You go back and think again, about this poem and its desperate parcelling up, locking away, it’s held breath, the compression of its lips, its fear of saying out loud in case it all comes out wrong. Or just comes out.

a smile sewn on

He braces and his words hit.

He gives a tsunami apology –

given and then retracted.

My operation will take place in weeks –

Now I wait, tethered to a drip stand,

a dog, stranded outside a supermarket.

Is it just me, or is the poet becoming more battle-hardened as I read through the sequence? I ask, because as someone who’s spent a great deal of time in hospitals, one way or another, and who’s been told this or that is incurable or inoperable, I may be just that bit too ready to assume the poem/poet and I agree about the stitched on smiles of consultants, the ones who may be deft enough with scalpels and sutures, but have never quite got the hang of empathy. And I may be a bit too ready to assume we feel the same about that sense of abandonment that comes over us when we become appendages of bits of equipment. What I do know is that I’ve tried often enough to write about the experience of ‘hospital’, and while I may have got the detail right, I’ve never come near the pared-down honesty of these three poems.

Thank you Kim Moore for introducing me to Hannah Hodgson, and recommending her poems for the cobweb. It’s been a huge pleasure.  Hannah, thank you for being our guest.