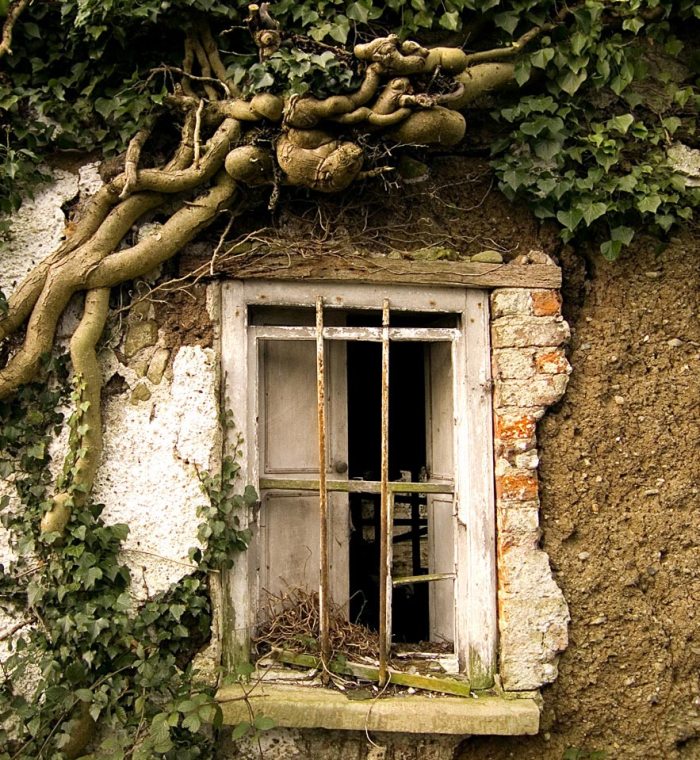 Here’s a thank you to everyone who’s followed the cobweb posts and made Sundays spent writing them worthwhile. And special thanks to all our guest poets for their generosity in sharing their poems and writing about themselves (the latter saves me more work than I can properly repay them for). And here’s a wish for better new year in 2018 for this damaged world than it got in 2017. Here we go.

The plan is to plunge into the canal
and collect treasures that I can
tape to your bed frame:
shivering damp daffodils
and rusty Czech crowns.
I will spend hours knelt over them
on the floor, sorting through the colours
and the different levels of degradation
and glow. I intend to take my time.
In the absence of a garland of ivy
there will be unravelled tape from a cassette
of the Small Faces’ greatest hits
and a collection of blanched stamps
featuring forgotten railways and beaches.
I will fill you with fugitive expectation
in an attempt to retain you. Don’t go yet.
Paper butterflies and fairy lights
will do the rest. It will take a while.
Once I have finished my display,
my hand will grab your hand and
drag you back from the caustic world
where I left you behind.

I see a bruise on his vocal chords
as he delivers a package
no postman could.

“You aren’t going to get better.”
I try to breathe –
but my eyes sting of paper cuts

and my chest heaves silent tears
into storage.
I nod, words trapped
In the clasp of my lips

Washer Woman
By night she would take their best poems
out into the back yard.
Douse them in lemon and vinegar.
Scour each word
with baking soda and salt.

She would unpick
the awkward images;
the forced connections
that itched their neck by day.

She would wring out the phrases
dyed with language that did not fit –
the Greek myths,
the borrowed registers,
the Latin names for trees.

She would carry them in a heap.
Peg up their stanzas in plain knit,
let their line endings drip.

This baby
This baby is a hurricane –
it’s the thunder of an underground train.
You can hear it coming from miles away.
You can feel it in the walls, the floor.

It’s the roar beneath the city street;
the earthquake that wakes you,
shaking beds, breaking plates.
This baby dislodges slates –

felled a steeple in Dudley.
This baby could kill.

This baby is news, big news.
This baby makes you huge.
Makes you Africa and Russia,
proud. A high hot-air balloon fat-filled with fire.
You could explode with it.
Stand clear! This woman could blow any minute.
*
This quick blood-bloom of certain cell
could grow to anything –
snowflakes forming like a wildflower,
a sly-eyed gull; a dinosaur;

a deep bellyful of weed.
This baby is a fallen seed.
The thin grass blade that ruptures the road.
It could open you up –

your stomach, the shape of a book not yet written;
the curve of the first word
of the book you wake speaking,
always forgotten.

It’s like that, this baby –
the light of a star that no-one can see
travelling ten thousand light years
to catch you unaware

knelt as you are in the slow Autumn rain,
heaving with dreams
and your body a poem
on the theme of ‘This Baby’.

Think of a name.

Leaves turn from green to grey.
On the breeze a scent of hops.
A star appears. A bat.

Beyond silver birch trees
a train sounds its two-tone horn,
slows for a bend, disappears.

We’re fifteen years old
with apple pies, cans of Sprite,
and dreams of the Eigerwand.

Above our ledge a sandstone roof,
below us the drop. Not far
but far enough.

William Paul, with millions to waste

on battling boredom, wondered which place

in Blighty had the least discerning taste:

could he unearth a town where utter tripe

would be considered culture at its height –

his troupe; the ten most woeful went on tour

The Human Mop, Frank and his Dancing Teeth:

from Cumbria to Cornwall no one asked

them back, except the Palace, Halifax.

My mother kept me from fairy tales,

not wanting those women in boxes

with all their waiting to stall me,

but when I grew up and found myself

boxed-in, I couldn’t see the walls

for years, not having rehearsed horror

in miniature, how a storyteller

I learn how to make a horror small,

that we boil it and pin it inside

our own blood, to teach ourselves

but memory inoculates, measured out

at the right dose. For lupus, try

absorbing a microgram of its snarl

disease, take only its slippers,

appear to swoon but prepare to kick.

The science of self-protection asks

we rewrite the story of what appals:

be glad the hairs on the back of your neck

stir when a wolf comes near you.

For grief, devour a sugar skull

and dance on the Day of the Dead.