I don’t need many excuses to use this picture. When I was doing A Level Art, my art teacher, Louis Wilde, made me copy it. I mean, really, copy it. It was probably a poor quality reproduction, maybe 4 inches square, at most. He told me I had to figure out how it was all put together. I had to draw it and redraw it. I started to understand what was going on with lines…that strong diagonal of the worktop, the echoed vertical curves of the women’s arms, the shapes made by the orange scarf, the shapes around it. It became more and more abstract the more I looked and looked.

And then I had to paint it and paint it. Bear in mind, this was a Boys’ Grammar School in 1959. I was the only one in the whole 6th form who was doing Art. It was not a well-equipped department. The papers were rubbish. The available paint was powder paint. Still. I struggled and struggled to get the texture of that work top. I put paint on top of paint. I started again. And again. And Louis Wilde just let me struggle. Keep going. he’d say. You’ll see. And I did. I’d have seen straight away if it had been the original, and you can see much clearer with a screen image. But the fact is, there’s hardly any paint on that pale oatmeal-y area at the bottom. Mainly, what you can see is the canvas, as is also true of the top part of the image. He was teaching me to look, was Louis, and I’m still grateful.

Drawing and redrawing the two figures and then painting them made me look at how the upper body is put together, the ways it works. You can feel the weight of bone and flesh and muscle, the ways they flex. I never managed to figure out how Degas managed to suggest that the weight of the figures continues all the way to the unseen floor, hidden by the diagonal line of the worktop. Miraculous. But here’s the kicker…we were into Abstract in 1959. Representional painting was dead. Or unfashionable. Much the same thing, when you’re 16. Louis had me doing synthetic cubism quicker than you could say Braque. So I never really got to think about what the picture was saying about these women and their work. I never for a second considered what Degas was well aware of…their tiredness, the steamy heat…look at that big stove, or copper, or whatever it is…look at the haze of light, muzziness. I was reminded of this, reading U.A.Fanthorpe who voices one of the women in this painting. I can’t remember the title of her poem. But in a footnote, she remarks that Degas got the title of the painting wrong. It’s called Women ironing. Fanthorpe says that these are women trained in a trade involving skill and stamina. They’re professionals. The painting should be called Ironing women.

What she’s interested in isn’t art history. It’s living breathing human beings. I’ll come back to this. Now, when I started writing this yesterday (May 21) I was in an odd frame of mind; no, not odd. Uncomfortable, mean-spirited. Why would that be? I think that it’s because for the last four years in poetry I’ve been flying by the seat of my pants. I’ve been ridiculously lucky to be able to do that. Four pamphlets, a first collection, and now a second, joint collection which will be available in June. And very handsome it looks.

Why the odd feeling of flatness? Surely, everything is wonderful? Isn’t this more than you could ever dream of? I remember suddenly realising that Degas wasn’t using much paint at all on that surface that I’d been trying to reproduce by laying paint on paint. I saw how it was done, and what I felt was …deflated. I’d been missing the point all along. Less was much much more. I have to say it was a lot later that I recognised that the women in the picture, their situation, and work and humanity was what mattered, and the technique was a means to an end. Not the end, any more than ‘having a collection’ is an ‘end’. It’s a means of telling what you make of the world.

Poets I love have told me how they went to sleep with their first published collections under their pillow. I watched a poet I love sit in a daze of happiness on the day a parcel of copies of her first collection arrived. I saw her reading the other week, and during her reading she talked about how she’d written nothing, really, for a year after that. Not writers’ block, whatever that is, because I think that describes a kind of desperation. Not wanting to write and being unable. That wasn’t it at all. It was just..not writing.

I haven’t felt it like that. I’ve gone on writing and writing. But I think I may have made a mistake in getting involved in that poem-a-day-April, which coincided with finishing the new collection. I wrote 50+ ‘poems’. I worked on every unfinished draft from two years of going to writers’ workshops. I’ve read them all over and over. I feel as though I’ve spent all my savings in one big splurge, and I’ve nothing to show for it and less to fall back on when it rains. Flat. A bit like realising Degas didn’t use much paint. The ‘is that it?’ feeling. Well, it is what it is, and we’ll ask for the serenity to accept it until it decides to go away. Because it will. In the meantime I found myself writing a series of shortish poems which wonder whether poetry’s all it’s cracked up to be. You know you’re in trouble when you start writing poems about poems. I’ll share them with you. Think of it as confession. Have a read of Auden’s ‘Musee des beaux arts’ first. 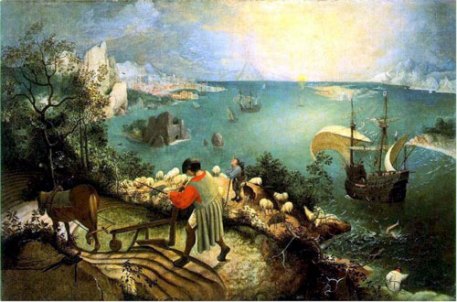 The whole of the moon

They give themselves airs, poets,

make large claims on the world,

who stake little flags in cairns

in wildernessess of snow and cold.

You don’t get painters doing that,

the ones for whom it’s enough

till they almost believe they know

how the moment works,

the art where you see all of it

at once, at the same moment

as everything else  inside the frame,

right to the very edges

where the moment stops.

A poet wonders how would it be

if the picture went on round

the corner, if you could see

where Breughel’s hunters came from,

and who or what was following.

Poets  tell you what matters

is the moment, but really

the why, the who, the what and when,

the dumb ghosts in the machine.

painters give you everything at once,

you stand in the space where they were,

they gift you their eyes, don’t stand

behind you to explain or point.

Poets are always at your shoulder,

touching your elbow, you can’t

shut them out. You go at their pace,

top to bottom, left to right.

A painter sees the sea, the cliffs,

the clouds, the boy scaring crows,

the ship, a splash. Doesn’t write

a title underneath. A poet tells you

what the painter meant.

Through the scrim and scaffolding

of words you will never see

again  the world he saw.

A painter can stop the moment

of a girl lit from a window,

pouring milk from a jug. The milk 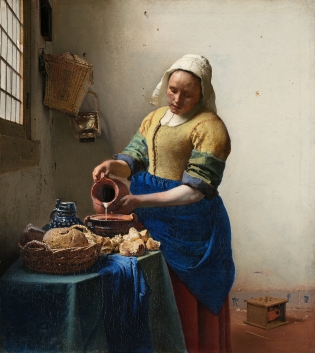 Intent and still as a cat, a painter

sees a woman ironing, the turn

of her shoulder, the planes

of greenish light, the way flesh

it borrows colour, blue and violet.

You look through the eyes of the cat

and see with a start that it’s true,

the way a torso shifts to press

down on an iron, how a finger

moves a strand of errant hair,

how red is the inside of a yawn.

He watches how a dancer watches

herself in a long mirror. He doesn’t

say she loves herself in her froth

of muslin, her satin shoes. He doesn’t

say how tired is the ironing woman,

how hot, or bored, how long the day.

He lends you his eyes and quietly

goes, leaves you to make of it

What was all that about? Not for a moment was I thinking of stopping writing to take up painting. I think what was behind it was thinking about the whole purpose of signs and symbols as a way of illuminating the world, celebrating it and the people in it. And at the same time thinking that either I’d said as much as I possibly could, or that however much I did it I’d never say anything particulary new or memorable, or both.

And then you’re given a gift. A poet who says she didn’t write anything for a year after her first collection was published. But who is now writing wonderful new stuff. And another; yesterday, I reblogged a post from Julie Mellor. When you’re finished here, do go and read it. It seems ages since she was a Poetry Business Pamphlet Competition winner, and then seemed to go off the radar (though I’ve kept reminding you how good she is via the cobweb). She’s been quietly working away, listening, watching, researching, absorbing. She’s finding herself in new places, exploring things she hadn’t expected to explore. If that doesn’t cheer me up, nothing can.

So when I write: Now what? Or. What next? you can imagine two distinct ways of saying it. One irritable and tetchy. Or one that say, let’s get cracking. Work to be done. This morning, it’s the second voice, and I’m grateful to the ones who made me feel this way.

And that, I promise, is the last recycled post for a good long time (or so I fervently hope) and next week we’ll be back to what I set out to do in the first place, which is to share my enthusiasm for poets I’ve heard and been excited by. I’m delighted to say that next week, it’ll be a visit from Laura Potts. Come early and get a good seat.