Cautionary tale first and a mea culpa. Mea maxima culpa. I just tried to do something clever by updating last week’s post about a poet who I hadn’t known until I heard her reading at Writers in The Bath, in Sheffield, in February. It was a reading that told me this was the real deal…deft, poised, urgent engaged writing. Writing that made me wonder if I shouldn’t give up writing and do something I’d be better at. Maybe something with a chain saw. Or a shovel.  I wrote about how Judy Brown was one of those dark watchers who let us see so much we might have missed. A poet who writes with a quiet passion. A poet who can make you smile, and who can write things that can be heartbreaking. I spent a few hours of notemaking, researching, finding photographs and finally writing it all up and posting it. An hour ago I managed, in the process of trying to add an update, to permanently delete it. And because I’m a spasmodically tidy chap, I’ve thrown away all the hard copy notes and jottings. What I do have is the stuff Judy sent me in the first place, because I never throw away what my guests send me. I can’t recover what it took me nearly 4 hours to write last Monday.

So, here’s the moral. Back-up everything. If you write wordpress posts, write them in Word, save them as Word Docs, and then copy and paste them to WordPress.

What can I do to make up for stupidity and carelessness? Not enough, but still, I can share Judy Brown’s three poems again, tell you something about her, and give you a link to where you can buy her books. I also somehow managed to have saved a bit of the intro to the original post:

It’s the voice that grabs your attention, the image that sticks. Not the Joan of Arc sort of Voice…you want to watch out for that sort of thing, the rapt, the Enthusiastic. It ends in tears. The voices I have in mind are the ones I keep writing about, one way or another…the ones that I hear that make me want to buy their owners’ pamphlets and collections. Judy Brown’s is one of those voices.

I can also share this picture of part of the Cumbrian coast that she travelled through and stayed in, Bill Bryson style, recording its landscapes and its (sometimes dubious) B&Bs and hotels.

So, if you missed it last week, here she is.

Judy Brown’s ‘Crowd Sensations’ (Seren, 2016) is a Poetry Book Society Recommendation. Her first book, ‘Loudness’ (Seren, 2011), was shortlisted for both the Forward and Fenton Aldeburgh prizes for best first collection. Judy was Poet-in-Residence at the Wordsworth Trust in 2013, a 2014 Writer-in-Residence at Gladstone’s Library and is a 2017 Hawthornden Fellow. She has won the Manchester Poetry Prize, the Poetry London Competition and the Templar Pamphlet Competition (with ‘Pillars of Salt’, 2006).  Judy was a lawyer and  worked for many years in international law firms, including work in Hong Kong, until she started writing poems, but now lives in a churchyard and writes and teaches.   judy-brown.co.uk

[Line break alert: I see that from time to time. WordPress will ignore line and stanza breaks. Stanza breaks, particularly. This week it keeps getting rid of them entirely. So, just in case it does it again, I’ll announce the stanza shape at the start of each poem where needed]

To the poems, then, but without the commentary that I can’t reacpture. First up, a cityscape which will mean you never see the London skyline in the same light again, understanding that steel and glass are parasitic of the light

There’s something over-familiar about the cranes

rising through the city.  For centuries its huddle

was spiked only by the paraphernalia of spires.

Through the river-soaked glass of the new station

we can measure the torturer’s bamboo as it grows

into a friable body.  The shallow-rooted boroughs

might be peeled off, easy as a roll of turf.

which are coppery-blue from buried money.

Skyscapes are a story I’m bored being bored with.

Still, the latest towers are eating light like plants,

donating grace as they hurry into their final poise.

A confession has been exacted, then simplified.

All that remains as we sink down into the tunnel

between platforms is the city’s current heraldry,

its long bones opening our skulls to the air.

Published in The Scores (thescores.org.uk), September 2016)

The second poem is one of a sequence, Songs from West Cumbria, which is woven into her collection Crowd sensations. You’ll see what I mean by the poet as ‘dark watcher’

Was This Review Helpful to You?

There was a goat outside the window of my Classic Double,

working a bald strip of tilted earth behind wire.

Between us laya five-foot-deep concrete alley

through glass; my admiration at its brown head and neck

on a white body, like two beasts severed and sewn;

and some prison dreams neither of us would divulge.

In the bar, low sun glimmed off the sea.  I couldn’t

get a seat near it.  The men from the power station who could,

as a squadron, turned their headsfrom the window

to watch the TV above mine.  For me too, it was hard

to believe in the beach that stretched for miles each side

Breakfast was an open bag of Kingsmill White,

some soft croissants pouched in cellophane, plus

one bruised pear which I took out of fellow feeling.

I had to get us out of here: away from the owners

talking business in their sagging tracksuits, away

from this disowned ground, its hand-hot rain.

It’s the moment that matters, says Clive James. Sometimes the moment is also an image. The beach like a a strip of parcel tape ‘ripped off something useful’. Lovely. Desperate. 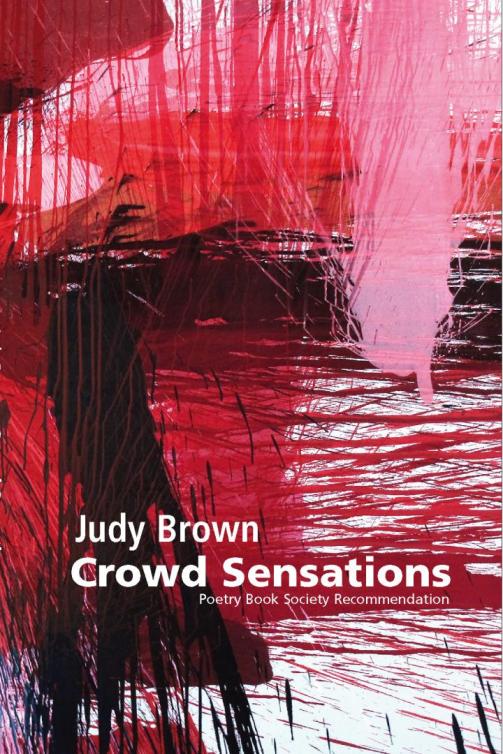 Last poem; I think the man in the poem lives in the city of predatory glass and steel that eats the sky.

This man believes a woman can feel the muscle

of money changing his skin, a second landscape

mapped over pectorals, biceps, his long back.

It’s a language that means she reads his body

in the altered curve as thigh flares into buttock.

It’s not about the palm’s pleasure but signification.

No woman loves him without moistening her lips,

the word price commingling with mint on her breath.

She keeps his heat and spill in her throat: investment.

This is exegesis, the note of the glassware, the slap

in the lift to the thirtieth floor  The actual moment

is nothing, it’s about what she learns of her value.

Down on the cushiony carpet is a private education.

You cannot touch me, he says but she’s expected to try.

Under his eyelids the message is: amethyst bruises,

unpettable dogs, as his hands mete out a currency

that more than repays the damage done to him.

Judy Brown, forgive me for losing the other 1500 words of appreciation for your work. I hope you’ll come back again some day. The best I can do is urge everyone to go and buy your books. So I will. Here’s what Seren say about Crowd sensations

“Poet Judy Brown’s new collection, Crowd Sensations, is a worthy follow-up to her Forward-prize nominated debut, Loudness. Brown is a poet of dazzling contrasts, of thoughtful paradox, intimate confidences and precise evocations. Her titles and first lines both draw you right into a poem and then quite often surprise you with a narrative that you hadn’t quite expected. ‘The Things She Burned Last Year’ references a past both remote and near, like multiple reflections seen in a mirror. Brown is a poet of profoundly unsettling domesticity as in ‘The Dehumidifier’, which unravels the metaphysics of damp and ‘This is Not a Garden’, which is a cool summation of a failed marriage. We frequently imagine an uncomfortable intimacy: ‘Poem in Which I am Not Short-sighted’, or are given a scary anecdote like: ‘The Post Box in the Wall’. There are serious poems that lure you with humorous titles: ‘Poem in the Voice of a Dead Cockroach’.

A key theme is the contrast between living in the city and the countryside. The author has lived in London and Hong Kong and has recently had residencies with the Wordsworth Trust in Grasmere and at the Gladstone Library in North Wales. Her spin on landscape is original and characteristically unnerving: ‘Elterwater Rain’, ‘Dove Cottage Ferns’ and ‘One of the Summer People’ reflect on nature and the place of the traveller, the incomer, the tourist. ‘Green Man’ also imagines a historical/mythical character and has him walk through a busy city street, shunned and unrecognized. Her memories often focus and celebrate pivotal moments of change: the move from city to country, the release from a doomed relationship, and the discovery of a new street or landscape. A fascination with artistic technique also features in a number of poems: ‘After the Discovery of Linear Perspective’, ‘On a Woodblock Prepared for an Engraving’.

Such is the author’s skill that these poems can often be said to be about more than one thing at a time. They unfold themselves upon the page in concise forms and with considerable flair. Judy Brown’s Crowd Sensations will be a joyful discovery for the intelligent reader.”

And so it will. You could also chase up a review in The North ,by Ed Reiss which you can find via this link (which is, handily, also the link to the Seren site …where you can buy the books!)